As part of the Hydrologic Cycle, water that has evaporated and precipitated back to earth can end up in various places.  The reason certain water supplies typically require water filtration systems to meet with our demands for safe and aesthetically appealing H2O, is that water is a solvent that picks up a little bit of everything it touches as it moves through the ground.  Depending on what is in the ground (which can vary widely on a regional basis), different water filtration systems will be required to remove any contaminants that may be present by the time the water reaches your home.  The following is a more complete description of where the water goes once it falls back to earth. 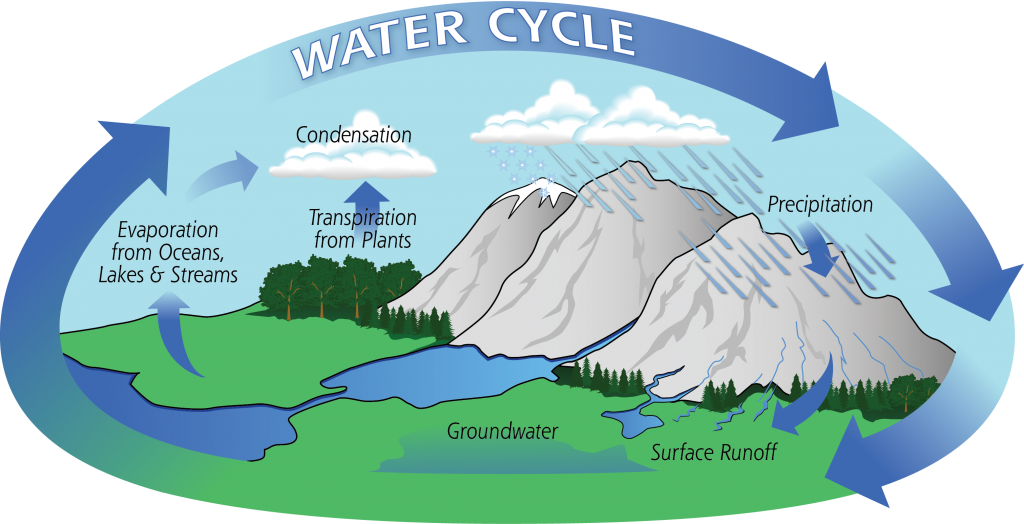 Water stored in the atmosphere can be moved relatively quickly from one part of the planet to another part of the planet. The type of storage that occurs on the land surface and under the ground largely depend on the geologic features related to the types of soil and the types of rocks present at the storage locations. Storage occurs as surface storage in oceans, lakes, reservoirs, and glaciers; underground storage occurs in the soil, in aquifers, and in the crevices of rock formations.

The movement of water through the eight other major physical processes of the water cycle can be erratic. On average, water in the atmosphere is renewed every 16 days. Soil moisture is replaced about every year. Globally, waters in wetlands are replaced about every 5 years while the residence time of lake water is about 17 years. In areas of low development by society, groundwater renewal can exceed 1,400 years. The uneven distribution and movement of water over time, and the spatial distribution of water in both geographic and geologic areas, can cause extreme phenomena such as floods and droughts to occur.

If a fifty-five gallon drum of water represented the total supply of water on the planet then:

a) the oceans would be represented by 53 gallons, 1 quart, 1 pint and 12 ounces;
b) the icecaps and glaciers would represent 1 gallon, and 12 ounces;
c) the atmosphere would contribute 1 pint and 4.5 ounces;
d) groundwater would add up to 1 quart, and 11.4 ounces;
e) freshwater lakes would represent one half ounce;
f) inland seas and saline lakes would add up to over one third of an ounce;
g) soil moisture and valdose water (the vadose zone extends from the top of the ground surface to the water table) would total to about one fourth of an ounce;
h) the rivers of the world would only add up to one-hundredth of an ounce (less than one one-millionth of the water on the planet).