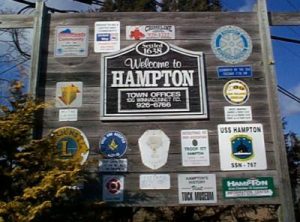 Hard water contaminants found in well water supplying homes in Hampton, NH can be removed with a water softener. The main hard water minerals are magnesium and calcium. Also commonly found in Hampton are iron & manganese.  The EPA maximum allowable level for iron as a secondary contaminant is .3 parts per million. The EPA maximum allowable level for manganese as a secondary contaminant is .05 parts per million. Small amounts of these minerals can have large affects on your home’s water quality. The EPA has no maximum levels set for calcium and magnesium in drinking water. Without water softening, these minerals can have devastating affects on your home’s plumbing as well as your ability to clean. Hard water interferes with almost every cleaning task, including washing dishes, laundry and taking a shower. Clothes can look dingy and feel rough and scratchy. Dishes and glasses get spotted and film may build up on shower doors, bathtubs, sinks and faucets. Washing your hair in hard water may leave it feeling sticky and dull. Finally, hard water can cause a residue to build-up in pipes that can lower water pressure throughout the house.

There are different types of water softeners, including up-flow versus down-flow which can make a big difference, particularly if there are elevated levels of iron in the water. Also, high efficiency softeners use much less salt and water in the equipment’s regeneration cycle.  For a full discussion on what hard water is, see the link at Hard water described.

Affects of hard water, iron & manganese include corrosion and scaling inside pipes, major staining throughout the home’s showers, bathtubs, and sinks and destruction of hot water heaters way ahead of their useful life. Aside from some of the affects mentioned above, hard water scale can also build-up inside hot water heaters insulating the temperature sensor inside the tank causing them to work much harder to bring the temperature up to the set level. Without water softening, this will reduce the useful life of your hot water heater and require early replacement. For those using their well water for outside lawn irrigation, iron and manganese can cause major staining of outside walkways, house siding and anyplace the water touches.  See the link at https://h2ocare.com/lawn-irrigation/. Hydrogen Sulfide is evidenced typically by a rotten egg smell in your water, however this may also be caused by high Manganese levels in the water as well. A water filtration specifically for this problem is effective in correcting this.

A water softener is effective in removing dissolved forms of iron & manganese and hardness minerals. To remove particulate iron or manganese, a cartridge filter with proper micron rating will be effective. Depending on the specific situation, this could require a series of filters with different size micron ratings to handle heavier levels in the water.  Selecting the appropriate micron rating and style of filter can be determined by a water treatment professional based on water test results and other symptoms. For more information on Iron and Manganese in water, see articles in Water Technology Magazine at the following link: https://h2ocare.com/publications/

Other contaminants found in Hampton private well water include Radon and Arsenic. A water softener (water softening) will not remove these health threat contaminants from your water. Radon is safely removed with an aeration system that agitates the incoming well water, releasing the gas from the water in a sealed chamber, then venting it to the outside ambient air.  Arsenic in water can be removed at the point of entry into the home with tanks filled with arsenic specific resin that captures the arsenic before it can get into the home’s water supply. Point of use systems for drinking water can use reverse osmosis technology to effectively remove arsenic. Speak to a water treatment professional to decide which system is right for you.

Formed in 1989, H2O Care is an established regional water filtration and testing firm.  Articles published by the Company regarding regional water contaminants can be seen in Water Technology Magazine or linked through the website publications section at http://h2ocare.wpengine.com.  Contact us by email at service@h2ocare.com or by calling us at 800-539-1100.