Manganese is a mineral that, in very small amounts, is essential for proper functioning of the human body. It is a trace mineral present in the human body in small quantities, primarily in the bones, liver, kidneys and pancreas. Manganese is important in connective tissues, in the formation of bones and blood-clotting factors. It is also involved in fat and carbohydrate metabolism, calcium absorption and blood sugar regulation. In addition, manganese is important for brain and nerve function. However, in higher concentrations, it can cause staining, pipe corrosion and possible health problems (for removal, see section below).  Evidence of manganese in water can often be seen inside dishwashers as a black residue as well as in toilets, sinks and shower stalls. 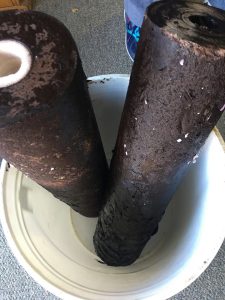 Children are considered to be particularly susceptible to possible effects of high levels of manganese exposure because they absorb more and excrete less manganese than adults. This adds up to a greater potential for exposure in the very young. Since manganese’s effects on the developing nervous system have not been adequately studied, it is especially prudent for pregnant women and young children to have drinking water that is below the EPA action level.  ATSDR reports several studies that showed decreased ability in neuro-behavioral performance testing and in several educational parameters in children exposed to high level of manganese in drinking water and diet for several years. To access our article published on manganese in Water Technology Magazine, see the link at http://publications/ and then click on the article titled, “Manganese, The Good For You, Bad For You Mineral”.

H2O Care is a full service water filtration and testing organization, originally formed in 1989, based in Middleton, MA off route 114 with additional offices in Stow & Lakeville, MA. See our published articles in Water Technology Magazines at publications. Reach us at service@h2ocare.com or 978-777-8330.