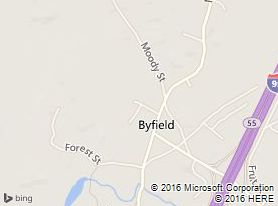 If your private well contains elevated levels of the minerals or contaminants identified later in this report, you may need a water filtration system or water softener to improve your water quality. If your home is supplied by town water, iron and manganese are not uncommon minerals found in Byfield that may need to be addressed. For private wells, the most common water quality issues encountered in Byfield are Iron, Manganese, and hard water. Water testing is highly recommended if you do have a private well for an accurate assessment, analysis and recommendations.

Iron and Manganese are naturally occurring minerals commonly found in New England’s water supply. Together, they are commonly referred to as “The Stainers” in the water treatment industry.

Iron shows up in two forms; Dissolved in solution (ferrous form – clear water iron, can’t see until it stains) or precipitated (ferric) particulate iron which you can see in the water. Typical symptoms of iron in your water include Red/Brown stains in sinks, tub, dishwasher, laundry and/or Metallic taste.  Iron may also show up in the form of Iron bacteria. Although harmless, iron bacteria can form gelatinous growths that my plug pipes or break free in slugs of dirty iron-laden water with unpleasant tastes and odors. The U.S. EPA drinking water regulations set a recommended secondary maximum contaminant level of iron at .3 milligrams per liter. The reason they call it a secondary contaminants is that iron isn’t considered a primary health threat. See the link at Iron Article in Water Technology Magazine for more information on Iron in water and related water filtration challenges.  A water softener will be effective in removing dissolved iron from the water. A water softener will also remove hard water minerals and provide you with soft water for cleaning, bathing, etc.  An “up-flow” water softener is recommended for water that contains high levels of dissolved iron as the contaminant can build up in the lower section of the softener over time with down-flow systems. A water treatment professional can explain this more fully. Sediment filters are effective in removing particulate iron from the water and would typically be installed before the water softener.

Manganese similarly shows up dissolved in solution or precipitated (particulate) which you can see in the water. Typical symptoms of manganese in your water include brownish-black staining in the dishwasher and other plumbing fixtures.   Manganese may also show up in the form of manganese bacteria.  Although harmless, manganese bacteria can form gelatinous growths that my plug pipes or break free in slugs of dirty manganese-laden water with unpleasant tastes and odors. The U.S. EPA drinking water regulations set a recommended secondary maximum contaminant level of manganese at .05 milligrams per liter. Manganese is also considered a secondary health threat, however at certain high levels, especially in children, can be a health threat. For more information on this topic, see the link at Manganese Article in Water Tech Magazine. As with Iron, a water softener will be effective in removing dissolved manganese from the water. Also as with Iron, an up-flow water softener is recommended to prevent potential build up in the lower section of the water softener.

Hard water is evidenced by white scale build-up on surfaces in the bathroom and other fixtures as well as inside the piping distribution system. There are no EPA limits on the amount of hardness in the water, however, the aesthetic and potential damage to water using appliances can be substantial. Additionally, it can be much more difficult to clean dishes, glasses or even your skin and hair with hard water.

In summary, if you are a resident of Byfield or are considering becoming one, encountering any of the above issues in your water is not something that should prevent you from living in a town you’ve decided you would enjoy. A high efficiency water softener plus sediment filtration will provide you with excellent water quality.

H2O Care is an established, Middleton, MA based full service water filtration and testing organization with an additional office in Stow, MA, originally formed in 1989. See our published articles in Water Technology Magazines at http://h2ocare.com/pub. Reach us at service@h2ocare.com or call 978-777-8330.