The most commonly found water quality issues in private wells in Westborough, MA are Iron, Manganese, and the hard water minerals Calcium and Magnesium.  While Radon and Arsenic are less likely to be found, they should be tested for as they have no taste, smell or other noticeable symptoms and are considered serious health threats. While naturally occurring, the effects of these contaminants on your home’s water can either cause potential health concerns or aesthetic and other problems. Hydrogen sulfide is evidenced typically by a rotten egg smell in your water, which may also be caused by high Manganese levels in the water. For more information on these, see the paragraphs below.

Manganese and Iron are naturally occurring minerals commonly found in New England’s water supply.  Together, they are commonly referred to as “The Stainers” in the water treatment industry.

Iron in water takes two forms; Dissolved in solution (ferrous form – clear water iron, can’t see until it stains) or precipitated (ferric) particulate iron which you can see in the water.  Typical symptoms of iron include Red/Brown stains in sinks, tub, dishwasher, laundry and/or Metallic taste.  Iron may also show up in the form of Iron bacteria; although harmless, it can form gelatinous growths that my plug pipes or break free in slugs of dirty iron-laden water with unpleasant tastes and odors.  The EPA drinking water regulations set a recommended secondary maximum contaminant level of iron at .3 milligrams per liter.  The reason they call it a secondary contaminants is that iron isn’t considered a primary health threat. A water softener will be effective in removing dissolved iron from the water. A water softener will also remove hard water minerals and provide you with soft water for cleaning, bathing, etc.  An “up-flow” water softener is recommended for water that contains high levels of dissolved iron as the contaminant can build up in the lower section of the softener over time with down-flow systems.  A water treatment professional can explain this more fully. Sediment filters are effective in removing particulate iron from the water and would typically be installed before the water softener.

Manganese also shows up dissolved in solution or precipitated (particulate) which you can see in the water.  Typical symptoms of manganese in your water include brownish-black staining in the dishwasher and other plumbing fixtures. Manganese may also show up in the form of manganese bacteria; although harmless, manganese bacteria can also form gelatinous growths that my plug pipes or break free in slugs of dirty manganese-laden water with unpleasant tastes and odors.  The U.S. EPA drinking water regulations set a recommended secondary maximum contaminant level of manganese at .05 milligrams per liter. Manganese is also considered a secondary health threat, however at certain high levels, especially in children, can be a health threat. As with Iron, a water softener will be effective in removing dissolved manganese from the water.  Also as with Iron, an up-flow water softener is recommended to prevent potential build up in the lower section of the water softener.

In addition to the above systems described, there are many other types of systems to remove bad tastes & odors, sediment and many other objectionable minerals and contaminants in the water.  If you are experiencing a rotten egg smell in water, you likely have hydrogen sulfide in your well or possibly high levels of manganese. For more detail on bad tastes & odors, see the link at bad-odor-taste-water/.  Starting with a water test will dictate the right approach to eliminate these types of water quality issues.

Radon usually originates in deep wells that tap radon contaminated groundwater.  It is impossible to detect radon gas without appropriate and properly taken laboratory water tests.    The gas releases into air when water is turned on in your home via showers, faucets, dishwashers, washing machines, etc.  If radon is present in your home’s water, it may also be present in the air and should be tested accordingly.  Radon can be a serious health threat.  For more information, see the link at: Radon in Water Article .  Water filtration systems that effectively remove radon from water will include a sealed, agitation chamber that churns the water to release the radon gas, and then vents it safely outside.  The vent must be installed to release the gas at a high enough level outside of the home to allow it to safely mix with ambient air.  This proper venting is critical to a safely designed system.

Arsenic can have severe health consequences as it has been linked to cancer.  The EPA  has set a maximum allowable level (MAL) of Arsenic in drinking water at .01 mg/L (miligrams per liter) or 10 parts per billion. Depending on the level of arsenic found in the water, fiberglass tanks are filled with arsenic-specific media that will grab the arsenic out of the water as it flows through.  Proper installation and maintenance is critical, but these systems are very effective and proven.  For an article we had published in Water Technology Magazine regarding arsenic in water, see the following link Arsenic Article in Water Tech. 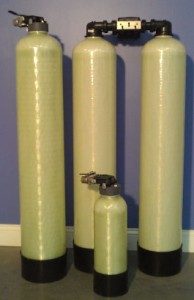 H2O Care is an established Massachusetts based water filtration and testing firm, formed in 1989 with offices in Hudson & Middleton, MA.  Articles published by the Company can be seen in Water Technology Magazine or linked through the website publications section at http://h2ocare.com.   You can reach us by email at service@h2ocare.com or by calling us at 800-539-1100.